A few years ago I built a tool to explore UK baby names. It took ages, and required lots of custom code. So I was very excited when Dr Stephen Bush and Professor Tom Freeman got in touch with some amazing new baby name data, because this is the kind of thing that Flourish makes easy.

And so it has proved! Today we launch the How popular was your name? tool, which lets you see how common your name was in English birth records, going all the way back to 1838. This data has never been seen before, and reveals interesting things about Victorian and 20th-century Britain. 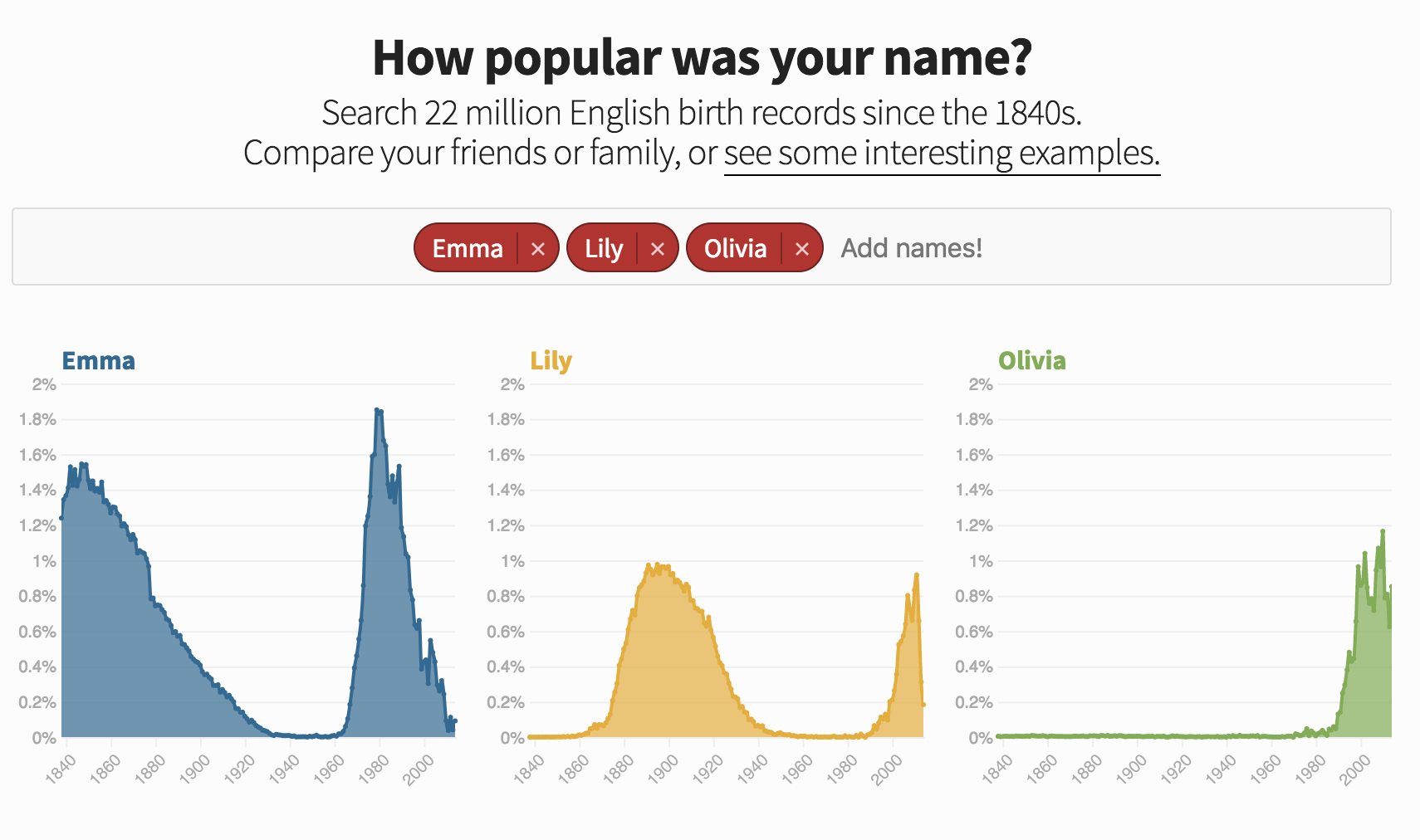 The joy of Flourish is that it took literally a hundredth of the time to build this than to build my own tool. That’s because Flourish lets you focus on what really matters – the data.

Read on to find out more about Victorian celebrities, royals and villains – or visit the site to check the trends for your own name.

It is a universal rule that no discussion on English baby names can avoid talking about the royals. So we’ll start there.

First, please note that this data is not every birth record in England – it’s 22 million records, transcribed by the volunteer UK BMD project. But it’s a big enough sample to show trends clearly.

In fact, royal spouses seem to have most impact, possibly because their names were less common. Albert becomes a popular name after Prince Albert’s early death, and peaks around Victoria’s death in 1901. And look what happens to Philip when the royal engagement is announced:

But the most striking royal trend is not a popularity surge, but the opposite. The name Margaret had always been popular in England, but from the 1940s it collapses, just as the famously spoiled Princess Margaret was starting to hit the headlines.

Of course, the monarchy is hoping that the younger royals will improve their image. And since the early 1980s there’s definitely been a resurgence in the names William and Harry:

Shirley you’re not serious: the birth of celebrity

More striking than royalty is the effect of celebrity – true modern royalty.

We think of celebrity baby names as a new phenomenon (Rihanna! Kendall!). But a little data analysis shows that this is nothing new. If anything, it was stronger in the earliest days of celebrity.

Shirley Temple was a child star of unprecedented proportions. The name Shirley is virtually unknown in England before 1930: by 1935 it’s more than 1.5% of all the births in the sample.

In modern English naming data there’s nothing that compares with this.

Almost as dramatic is the name Audrey. You might be thinking Audrey Hepburn, but this is much earlier. The name peaks at more than 1% of records in 1933:

Ever heard of Audrey Munson, “America’s First Supermodel”, the first woman to appear naked in an American motion picture? (In 1915 – they didn’t hang about.) Well, you have now.

As this suggests, it’s with the birth of film that celebrity name trends really start to appear. But the Victorians had their celebs too. The name Ada takes off in 1850.

I suspect, though can’t prove, that this is related to the early death in 1852 of Ada Lovelace, who when not writing the first computer programs, was a member of the notorious Byron clan.

At around the same time, the name Florence also becomes seriously popular. This is just as Florence Nightingale, another of the most famous women of the day, is entering public life.

So the Victorians had their celebrity name trends too: they just happened more slowly.

It’s fun to look for sudden dips in the data, which can indicate notoriety rather than celebrity. I haven’t found anything to compare with the modern fall of Jordan, but one notable decline is in the name Neville:

The name peaks in 1939, and then drops dramatically. Of course, Neville Chamberlain became Prime Minster in 1937, and resigned after war broke out in May 1940.

Mega-trends: the rise of individualism

If we look at the names with the highest peak popularity across several different periods, we can see the big trends in the data: away from very common, historical names, towards the rise of individualism.

The sample data grows sparser in recent years, so I haven’t charted it here, but overall, there is a much wider range of names. Nowadays, no names account for anything like 2% of babies: the most popular single boy’s name, Oliver, makes up less than 1% of births.

For other interesting trends, check out the pre-print of Stephen and Tom’s paper, which focuses particularly on network effects. Many thanks to the University of Edinburgh for sharing this interesting data with us.

Try the name explorer now, and let us know on Twitter what interesting trends you find! And watch the tutorial to learn how to build your own visualizations like this in Flourish, for free.